Everything You Wanted to Know about Publishing a Picture Book (But Didn't Know Who to Ask): part 2 of 4—Writing

After publishing four novels for kids, teens, and adults who love YA books, I decided to publish a picture book: Fay Fairy’s Very BIG Problem. I ran into a few problems of my own, and so I decided to write this series of articles to remind me how to avoid or overcome those problems next time, and so others can do the same.

If you're reading this, you probably already have something written down or you at least have a good idea of what it is you want to write. I have, however, noticed a few basic mistakes that picture-book writers often make when they're starting out.

First, a picture book should be under 1,000 words—and under 500 words is even better. Little kids have short attention spans. Make a picture book too wordy, and your book will probably lose their attention. So make it as short as you can, and make every word count.

Second, a picture book isn't just a story with pretty pictures added to it. A picture book needs pictures to tell the story. So if your story contains any words that can simply be shown in the illustrations . . . Cut. Them. Out. For example, if your story says, “Abigail had red hair,” or even “Abigail’s red curls bounced as she walked,” cut out the part about how her hair looks. Let the illustrations simply show what Abigail's hair looks like. If you're not an illustrator, don’t even mention it in the illustration notes unless it’s vital to telling the story. You might feel inclined to tell the illustrator, for example, that Abigail has red hair because your daughter has red hair, and you want the character to look like your daughter. But if it's not really vital to the story, leave it out. Let the illustrator best tell his or her part of the story the best way that the illustrator knows how. Maybe that’s drawing Abigail with red hair, but maybe it's drawing her with black hair. Maybe it’s by drawing Abigail as a bunny rabbit. The important thing is to give the illustrator the freedom to make your story the best that it can be.

Third, make your story kid, parent, teacher and librarian friendly. You’d think this goes without saying, but you wouldn't believe how many writers insist on writing stories that are meant to appeal just to kids or just to parents. Of course, you want kids to shout, “Again!” But that’s not going to happen if an adult doesn't buy the book first. Of course, you want an adult to buy the book. But that’s not going to happen if the kid isn't going to want to hear it.

You should also consider what your picture book offers a parent, teacher, or librarian that can't be found in another book. A parent, for example, might need a picture book about blended families or living with a developmentally disabled sibling or a bunch of other stuff that Dr. Seuss never considered writing about. A teacher might need a book about dinosaurs or rivers or a recent historical event or how to deal with a bully. And librarians are constantly being asked for books on topics they don’t have. Having a book on a needed topic can be a great way to land those paid classroom and library visits that—as we saw in part one of this series—can be a picture-book writer’s or illustrator’s bread and butter. Obviously, this is true for nonfiction, but it can also be true for fiction. So ask yourself what your book might offer its potential buyers, not just the kids that make up the intended audience.

One way to do this is to imagine offering your services as a visiting author to an elementary school teacher. That teacher is going to want you to do more than just read your book. What are you going to teach kids in connection with your book? Are you going to make your author visit interactive? If so, how?

Fay Fairy’s Very BIG Problem, for example, has a page in the back explaining how I created the story by taking an ancient Indian parable—”The Blind Men and the Elephant”—and changing it by asking, “What if the story were told from the elephant’s point of view?” I would start my author visit by telling the kids the original parable and how it gave me the idea for my book. Then after reading my book to the children, I would ask them to pick a story they all knew, like Cinderella, and I would ask them to see how many different stories they could create by changing parts of it, like the point of view character or the setting. It would be a creative exercise, and it would also teach them a bit about writing and the parts of a story. So how can you turn an author visit into something more for a teacher and her class? It’s something you should think about before you've even published your book.

Fifth, map out your book so that you’ve worked out what text goes on what page. CreateSpace prefers picture-books that have exactly 40 pages. Subtract the interior title page and the copyright page, and that means ideally your story should fill 34-38 pages. Pay attention to the rhythm between odd and even pages. Unless your book is made up entirely of double-page spreads, odd pages should go on the right, and even pages should go on the left after the reader has flipped the page. This means that odd pages are great places to ask questions, and even pages are great places to answer them. For example, on an odd page it could say, “What should Gloria Gorilla wear to the ball?”  The child thinks about it for a moment, picturing a ball gown. The page is flipped, and . . . The child giggles as she sees that Gloria Gorilla is wearing a swimsuit, or pajamas, or a spacesuit, or pretty much anything that seems a silly answer to that question.

Study hundreds and hundreds of modern picture books. Pay attention to what goes into them, how many words they have, how the pictures tell the story, how they appeal to both the adults that buy them and the kids the adults buy them for, the length and complexity of the words and sentences they use, and how the story is mapped out. Also ask yourself if this is a story that has been told before. If so, what does your story offer that’s new? If not, why hasn’t a book like yours been written before?

And finally, when you’re sure you've written the story you wanted to write in the best way possible, edit and edit and edit it some more. Get other people to look it over for you. If you can, join a critique group for picture-book writers, get your manuscript critiqued at a SCBWI (Society of Children’s Book Writers & Illustrators) conference, or find someone nice enough to critique it on Verla Kay’s Blue Boards, which are now the official SCBWI boards. Picture books are very short, and every word has to be exactly right. There’s no room for errors. And it helps to get a second pair of eyes to look it over. Of course, you need to be open to honest feedback. Just remember it’s not about you; it’s about making your story the best that it can be.

Once you're done, put the text in the size and font choice that you want. I asked my Facebook friends, who are mostly writers and illustrators, about recommended font size. The consensus was that a 16-point font is best for picture books. However, I found that was too small for the size I was planning to print the finished book, which was 8.5” x 11”. I chose a 20-point font instead. I also discovered that nowadays sans-serif fonts are considered the norm for picture books, because they're easier to read in short passages, particularly for young children. Helvetica is considered the best, but because I work on a PC, I chose Arial, which is similar. And I chose Arial Rounded because that fit better with the soft, rounded, and elephantine look I was going for in the book. I chose a 1.5 line spacing, because more distance between lines makes it easier to read; and I chose not to paragraph indent, because there were too many paragraphs that were made up of just one line. I also made sure that the final line of each paragraph with more than one line had at least two words on it, so it wouldn't look strange. I find it’s easier to format paragraph text in Word than in a graphics program, like CorelDraw, so I did all of this in a Word file with extra-wide margins. That way I could just copy and paste the text for each page from Word directly into CorelDraw without having to make too many adjustments. 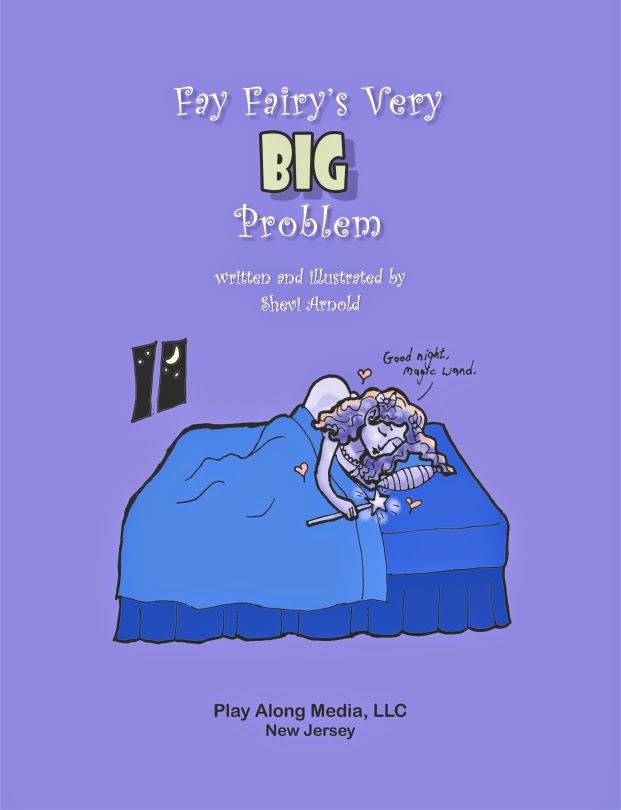 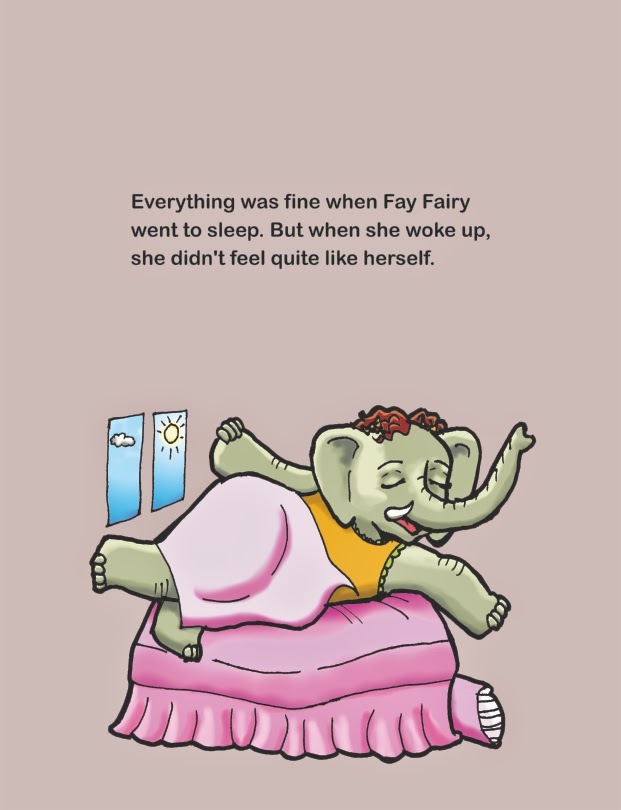 Of course, this is only the part of the writing that involves the story. You’ll also need to write a great title, the blurb (both for CreateSpace and the back of the book), your author bio (at least for CreateSpace, if not for the last page of the book), the copyright information (look at other books for ideas on how to do this), and a dedication or a whatever extra materials you might want to include. Having all these bits of writing done in advance can help make the final parts of creating a picture book and publishing it with CreateSpace a lot easier.

For more information on writing picture books, I highly recommend Writing with Pictures: How to Write and Illustrate Children’s Books by Uri Shulevitz. Picture Writing: A New Approach to Writing for Kids and Teens by Anastasia Suen and The Complete Idiot’s Guide to Publishing Children’s Book by Harold Underdown are also great books that deal with the topic. I also highly recommend Underdown’s fantastic website, The Purple Crayon, for all things related to children’s book publishing. It’s just overflowing with useful information.

That takes care of writing your picture book. In the next article in this series, we're going to look at illustrating it. Hope to see you then!